I just put the finishing touches (stitched the belt) on NL6030. 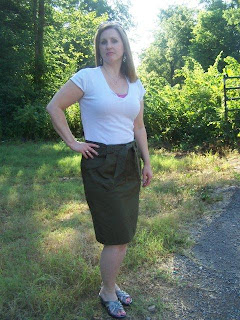 I made a "grown up" version of View D: I used the longer length of View A/B and added an additional 4.25" of length to make it work appropriate. 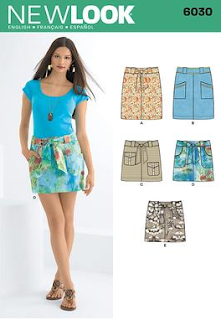 I cut a size 14 from waist to hip and a 16 from hip to hem. It's a close fit, but not tight. I'm also wearing it a couple of inches higher on my waist than it's intended. That's just my personal preference. 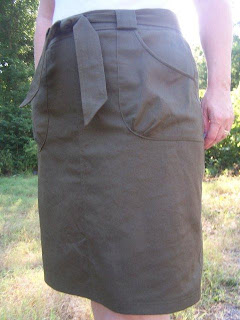 I pretty much followed the instructions as written, except for the zipper. They would have you install a lapped zipper, which seemed kind of odd to me for the center back. I used a regular zipper and centered it. I would have used an invisible zipper if I'd had one on hand, but I didn't, and I didn't want to put off finishing the skirt until I could get one. 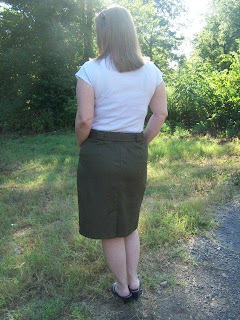 I used an olive green "wrinkle ease" twill from Joann's. It sewed up easily with an 80/12 universal needle, and it also presses pretty well. We'll see how it wears, but I have a good feeling about it. 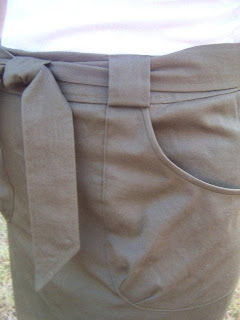 I love this skirt. It's easy to put together- the only real challenge was binding the pocket edges and getting the pockets positioned, but even that wasn't bad.

The pattern instructs you to interface the waistband/yoke, then baste the carriers to the bottom edge, and then attach the waistband to the skirt. I found that even though I marked and basted carefully, my carriers didn't quite line up with my pockets. I ended up basting them to the skirt, right on top of the upper pocket, and then attaching my waistband. I don't know if I made an error while cutting or in my pocket positioning, or if the pattern itself was a little bit off, but I recommend doing it this way for accuracy.

The details on this skirt are the best part. I love the center front seam, which is very casual. I did a double row of top stitching on mine to mimic a flat felled seam. The pockets have tiny darts in the corners which makes them 3 dimensional, which is a nice touch. My only criticism is that I think the pockets may be a tad "short" on me. I think they are proportioned for the micro miniskirt view and if I make this again I think I'll add just a smidge of length to them to match my longer skirt length.

I love the wide carriers which extend the pocket line all the way to the top edge of the skirt. I made the sash, and I like it, but I think this skirt would also look good with a purchased belt. The right belt would definitely reinforce the military/safari vibe I was going for with this. 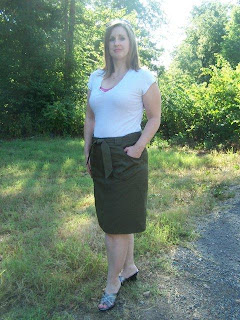 Probably the best thing about this pattern is that you can get so many different looks from it. And New Look was kind enough to provide separate front pattern pieces for the different views. I think I might like to make View C, the high/low pocket version, and maybe View E, which is essentially the same skirt I just made, but with pocket ruffles. I'd love it in camo, too! (Incidentally, I started to add the ruffles to this skirt, even went as far as basting one on, but the fabric is just a tiny bit too stiff and they didn't look right, so off it came.)

Now that this project is done, I have another knit dress in the pipeline, and I'm itching to make something from Burda Style...
Posted by Shannon at 6:46 PM

Totally love it!! I skipped over this pattern, seeing the length and thinking too young, but the pockets are super fun and I love the general shape. It looks great on you. Nice work!

This skirt is really cute! I have a question about your fabric, if you don't mind...I have seen this fabric at JoAnn's, too, and wondered how it would work out. Judging by your skirt, it will work great. But did you prewash the fabric before cutting? And did you use fusible or sew-in interfacing? Just wondering how it would take a fusibile interfacing with the twill weave. Thanks!

This is a great skirt! It's not showy, but it is oh so useful! The details make is special too.

Wonderful rendition of this skirt! I love when someone can see past the picture on the pattern envelope and make the garment their own...which is what you've done here!

Your skirt looks great. I really like the pockets. I have been looking for a straight skirt pattern with a casual vibe. I would have ignored this pattern if I hadn't seen your skirt.

Thanks for writing this up! It's on my "short list" of patterns to sew. Which means it's in the top 20, lol! I appreciate the tips. It looks great on you!

It turned out so cute!

Great skirt! I really like your version of this... much better than the pattern envelope. I never would have given this pattern a second look before seeing yours.

Great skirt! I love the style.