Construction has begun in earnest on Kitty Mittens (Vogue 8062.) I began by sewing an interfaced block of fashion fabric to the upper edge of my smocked and piped insert: 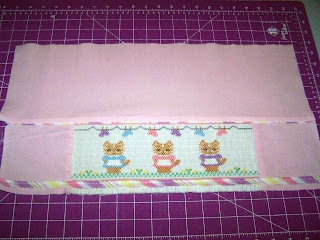 Vogue 8062 is not designed for an insert, so I had to modify the pattern. I eyeballed the insert against the pattern and decided that the empire seamline (from a different view) that was already marked on the front pattern piece would be the perfect placement line for the bottom edge of the smocked insert. I measured the insert and it was almost exactly 4 inches from top to bottom. So I drew a line on my pattern piece four inches above the line that indicated the bottom edge of the insert. Then I added 3/8" seam allowance lines below the upper line, and above the lower line. In essence, I'm removing a strip from the front of the pattern and replacing it with the smocked insert. 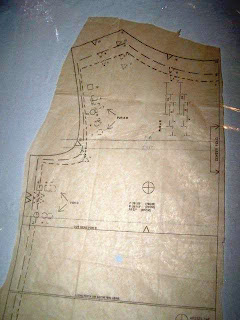 I traced the upper portion of the pattern piece (from the seam allowance line at the lower edge of the insert) and then folded it along the center front and cut it out. This gave me a complete pattern piece for the top of the dress front: 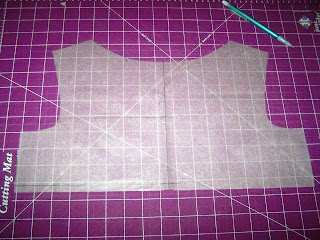 I laid this pattern piece on top of the insert (with interfaced fabric already attached), matching the center front line to the center of the insert, and the lower edge to the edge of the piping. Then I pinned carefully... 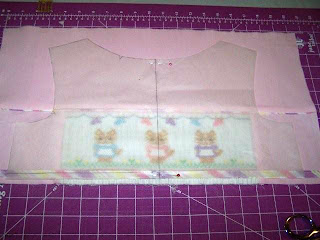 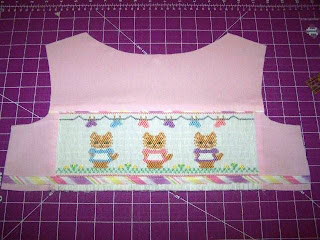 Next I folded the top of the original pattern piece down at the seam allowance of the lower insert line and pinned it to my fabric. I cut as usual. 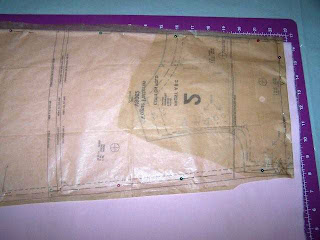 The pieces matched up perfectly. 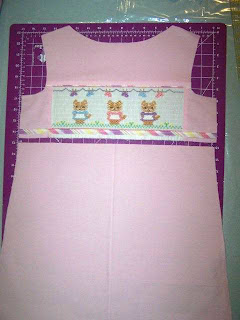 I forgot to mention in my previous post that I used Wash Away Wonder Tape to position my piping on the insert before sewing. I also used it when I attached the interfaced block to the top of the insert and I used it again to position the lower front. Then I basted, and stitched. It will dissolve and wash completely away when the dress is washed.
Here is the completed dress front. It still needs a little bit of pressing, but it's ready to go. I'll simply follow the pattern instructions from here on out. Well, sort of. I've decided to line this dress. I want the Princess to be able to wear it with tights and I don't want the corduroy to cling. 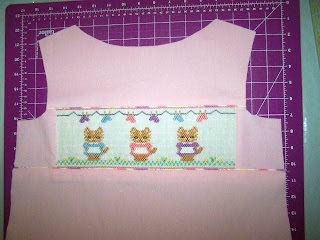 In other news, I also cut out 4 pairs of pajama pants for the Prince. Spongebob, Transformers, Darth Vader, and flannel cars. He's all excited about new PJ pants, And I'm happy because I cleared 9 yards of fabric out of the stash! 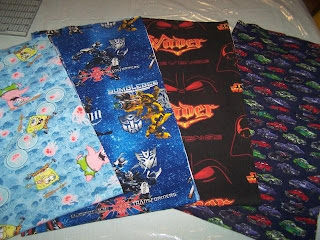 Aha! So wonder tape is the answer to getting the piping on so straight!

I can't wait to see the finished dress - it's going to be sooo cute!

Adorable, adorable... Wonder tape and Stitch Witchery are great inventions, aren't they? What pattern are you using for the pajama pants for your son?

You are my hero....I love: "eyeballed the pattern." Just amazing!!

Such a good tutorial on that. You should link it on the side bar! That's awesome!

And I wouldn't mnind some Darth Vader pj pants myself. Very cool. :D

so on the insert u dont cut fabric from under insert you just lay it on top of fabric and sew around it? and where does interfacing go ..on the back of the insert ?