Simplicity 3846 A Long Time in the Making

Just recently (a few weeks ago) I finished up these pants from Simplicity 3846: 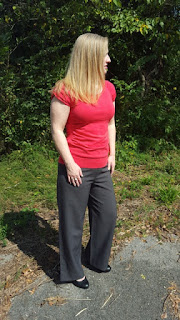 These are a very simple, plain pair of pants from this now OOP sportswear pattern: 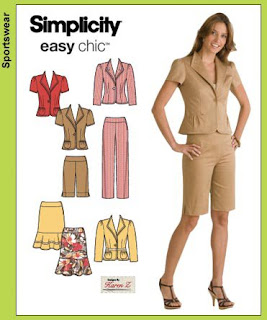 The pants have straight legs, a flat front, back darts, a contoured yoke and an invisible zip in the side seam.  The interesting thing about them isn't really the pants themselves, but how long it's taken me to finish them and finally wear them.

You see, I made these pants in 2009.  That's right, six years ago.  Right after I made the city shorts version.  I finished everything except the hems, and I must have laid them aside thinking I'll work on that later, let me sew something exciting right now.  And they got pushed aside, covered up with other projects and fabric, and next thing you know they were forgotten. 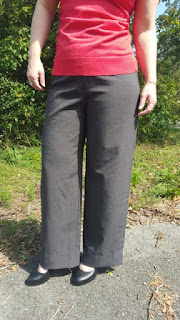 I know I pulled them out from time to time over the years, but most of the time, they were too snug to wear due to my fluctuating weight and so I didn't bother with those hems.  After all, how can you hem pants if you can't even get them on to mark the length?

Well, with my new, more active lifestyle I've noticed that I'm now able to wear a lot of things that had gotten too tight and had been pushed to the back of the closet, so I pulled these pants out and tried them on.  I mean, they were completely done except for those hems.  It seemed insane to let a perfectly good pair of pants go to waste!  And they fit!  So I immediately marked those hems and finished them.  And wore them! 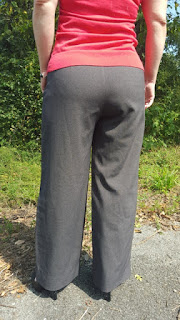 (Please excuse the wrinkles in the photos, I took these pics after the pants had lain on a pile of laundry overnight.  I have to grab that photo opportunity when I can!)  I made the original city shorts in a size 20, tapering in at the waist and CB.  I felt at the time that they were too loose so I cut these pants in a size 18.  I know all this because I pulled the pattern out and cut another pair using whatever adjustments I had already marked on the pattern pieces.

The original dark grey pair is made of a poly suiting that I'm about 98% sure I picked up at Walmart.  This new version is also a poly suiting, this time from Joann's. 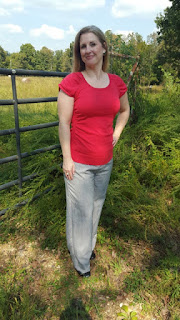 When I wore the dark grey pair to work, I felt that they were just a smidge too snug.  Not enough to tell by looking, but I thought I could feel it.  So for the light grey pair, I used 3/8" seams.  Well, I can't win for loosing because after a couple of weeks, the light grey pair feels too loose and the dark pair feels just right.  Ugh!  I'll probably go back and take the light ones in to 5/8" seams.

So, there's not too much to say about the pants themselves.  They are very simple and quick to make (as long as you don't set them aside and neglect the hems for 6 years!)  There are no fancy details to them, but if you want a simple pair of pants that will lie smooth under un-tucked sweaters and tops, these are perfect.  This pattern is now OOP, but it looks like it's still available here and there out on the internet.  Of course, Simplicity and New Look offer similar styles all the time in their sportswear patterns such as S1324, or NL6080.

So I have new pants and a UFO finished and out of my sewing room.  What is your oldest project that you've finally finished and worn?

That is hilarious that they were a UFO for so long!!! :) They look great though!