This will most likely be my last finished project for 2012.  (It's taken me long enough to finish!)  It's the "Well Draped dress with cowl neckline" from the October issue of Burda Style. 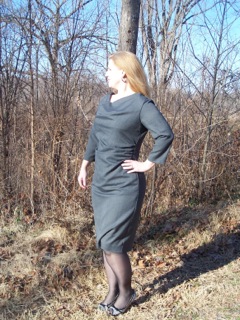 Please excuse the windblown skirt and hair.  I had to seize the photo opportunity when I could. 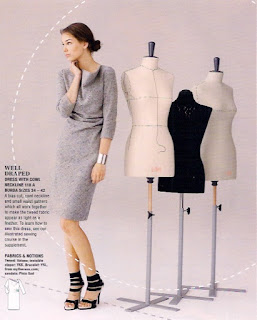 And the tech drawing: 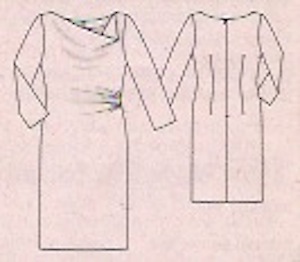 This dress was the illustrated sewing course for this issue, but really Burda should have used one of the more complicated projects to illustrate.  This dress was super easy to put together.  In fact, there are only four pattern pieces including the back facings.  And speaking of patterns, Burda made a little mistake.  The instructions say that the pattern is sheet A, when in fact it is on sheet B. 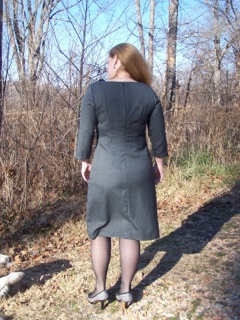 The back features an invisible zipper and two vertical darts.  The front is cut all in one piece with the cowl facing folding neatly to the inside.  I think the finished dress turned out ever so slightly more A-line than the tech drawing suggests. 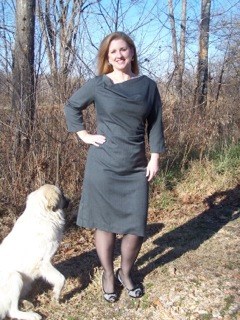 I used a black and white "micro houndstooth" suiting from stash that reads charcoal grey.  It's almost too substantial for this design- if I made it again I'd use a slightly lighter weight fabric.

The dress is unlined (I always wear a slip) and all the seams are serged. 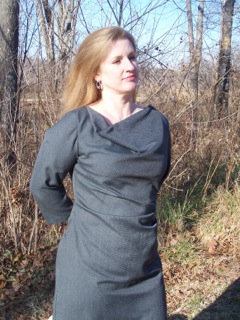 The pattern was offered in sizes 34 through 42.  I cut a 42 through the shoulders and graded out to a 44 at the bust and then out to a 46 at the hip.  I also added 1.5 inches of length at the waist and made a petite adjustment above the bust by folding out 3/8"horizontally.  I removed some ease from the sleeve cap by folding out an additional 3/8".  The sleeves went in perfectly.  Although now that I look at the photos, I probably should have shortened the sleeves a bit more for my little T-rex arms.

I also rotated the front pattern piece when cutting it out so that the cowl neckline was on the bias and the skirt was on the straight grain.  I was worried about the front hemline stretching out if it was on the bias.  In the end it worked out well since my fabric was rather heavy and without the bias at the neckline it may have been too stiff. 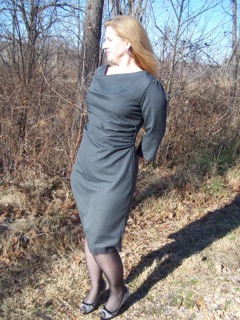 I love the side gathers.  I think they are a very nice detail.  I'm not so sure about the so called "cowl" which really seems more like an origami-ish fold.  I fussed and folded it several ways and never could seem to get it just so.  I finally just gave up and let it flop the way it wanted to.  Also, I can't decide if the dress looks pleasantly "draped" or more like a wrinkled mess.  The windy conditions and the dog trying to get into the picture didn't help, either.  I suppose I will have to wear it to work for a road test and see how it does before making my final decision.

And that's it for 2012.  The next item on the sewing drawing board- actually it's already cut out and construction has already begun- is a pair of wide leg pants.  But they won't be finished until some time next year!

This dress is great. Count on Burda for a great twist on a sheath dress!

It does look more a-line than the tech drawing, but it is still an attractive dress.
Have a Happy 2013!

That's a pretty dress that will go almost anywhere.

This came out really lovely. Definitely pleasantly draped I think!